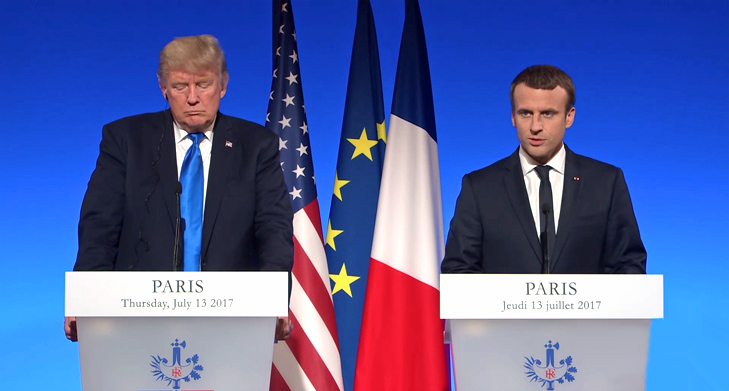 I wanted, above all, to thank President Trump for his visit to Paris this afternoon and tomorrow morning, and his delegation.

I was delighted, earlier, to host President Trump, who accepted the invitation I had made to him and his wife a few weeks ago to come to Paris to take part in 14 July in France.

Indeed, I think it’s both symbolic and important for the President of the United States of America to be here tomorrow for our National Day and to attend a parade that will involve American troops, because it will be an opportunity to celebrate not only our National Day but also the centenary of American troops’ intervention alongside France during the First World War.

I think we’re both aware that, whatever our respective offices, we’re part of a history greater than ourselves. We live in countries whose roots are stronger and deeper than what we are, and this centenary testifies to that. So President Trump’s presence was, in my view, not only natural but also, I think, a very good thing for the history of our two countries.

At the beginning of the afternoon, first of all with our wives, we were able to share a part of French and Franco-American history, at Les Invalides and the Musée de l’Armée there. We then had a detailed working session, which I must honestly say I’m very pleased with.

We discussed several issues of shared interest that enabled us to shed light on our similar views and goals, and above all a common work schedule for the coming months.

On trade issues, we agreed to do everything together to ensure that free and fair trade can be established; in this regard, the G20 summit in Hamburg expressed, in a way, a sensitivity to that.

We’d like to be able to work together to take effective measures to combat dumping in every sector where these practices appear, by exchanging the information we have and allowing the European Union and the United States of America to take the measures necessary in the framework of free trade - but fair free trade - to protect all our business sectors and our workers.

We then had a long discussion which allowed us to cover all common issues relating to international policy and the challenges posed in terms of our people’s security. I think I can say that on the fight against terrorism, our views have been perfectly aligned from day one, with a total determination to take every measure to eradicate terrorists and, wherever we can, limit their propaganda.

On the Internet, we agreed to step up our action and cooperation on the fight against propaganda, on the obligation for all operators to limit this online propaganda, and also on joint actions regarding cyber crime. In my view, these issues are absolutely crucial, I’d like the cooperation between our two countries to be stepped up and I was very satisfied to hear a shared sensitivity on President Trump’s part. So our services will be working together in the coming weeks and months to create a robust action plan on this issue.

On the Iraq/Syria situation, there again we agreed to continue the joint work, particularly to conduct diplomatic initiatives together enabling the post-war road map to be built. Consideration is under way on our role after the conflicts, but already our wish is to initiate a contact group to intervene much more effectively in support of what the United Nations is doing and build the post-war political road map, in particular in Syria, where it’s essential for us to build inclusive political solutions in the post-conflict period. We know where the destabilization factors lie, and this post-conflict road map will take them into account. So we’ve asked our diplomats and teams to work towards this to ensure that, in the coming weeks, the P5 can take and promote a concrete initiative.

We share the same determination on Libya, where, for my part - I shared this with President Trump - I’d like to take several strong diplomatic initiatives, given the situation we’re witnessing, which demands greater stability and greater control of the region. Whether it be Libya or the Sahel, I think I can say we have a shared and extremely coherent vision of the situation and a desire, again, to take very clear action to combat all forms of destabilization and terrorism.

Lastly, on the climate, we’re aware of our disagreements: we’ve expressed and shared them several times. I think it’s important to continue seeing how to make progress on this issue. I respect President Trump’s decision. He’ll be considering things and doing the work which is appropriate and reflects his campaign pledges. For my part, as I’ve said, I remain committed to the Paris Agreement and to my determination to continue the framework of that agreement and move forward, step by step, to what’s set out in the agreement.

That, ladies and gentlemen, is the gist of the discussions we had, in addition to friendly conversations that we’ll continue in the evening. I must say that on the major issues - namely trade, our countries’ security, the fight against terrorism, stability in the Middle East, Libya and the Sahel - we have a shared determination. The United States of America is strongly committed, in particular to the war in Iraq, and I thank President Trump for everything American troops have done in that context. But I want him to be aware how utterly determined I am to work with him on the issue, with total determination.

I really would like our two countries to further increase their cooperation on these issues in the coming months, because the threat we’re facing is a global threat, with enemies who are seeking to destabilize us by every means and who oblige us to have these shared views, which are, I believe, central to the very meaning of the long-standing alliance existing between our two countries and which fully justify President Trump’s presence in Paris today and tomorrow.

Thank you again, cher Donald, for being here."