SPEECH BY FRANCOIS HOLLANDE, PRESIDENT OF THE REPUBLIC 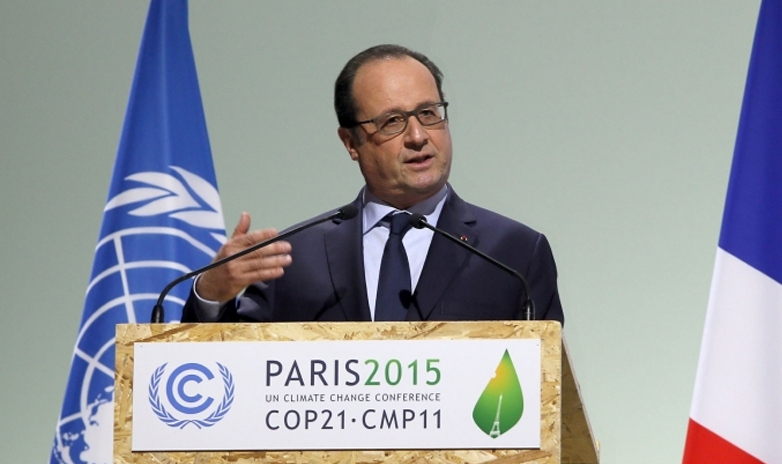 Secretary-General of the United Nations, dear Ban Ki-moon, Heads of state and government, Executive Secretary of the UNFCCC, Ladies and gentlemen ministers,

Today is a historic day. France is hosting 150 heads of state and government, and thousands of delegates from every continent. Never before has a conference received so many authorities from so many countries. And never – truly never – have the stakes of an international meeting been so high. For the future of the planet, and the future of life, are at stake.

And yet, two weeks ago, here in Paris, a group of fanatics brought death to the streets. I would now like to express the gratitude of the French people for all the gestures of support, all the messages, and all the signs of friendship that we have received since 13 November.

These tragic events are terrible, but at the same time they bring us obligations. They mean we have to focus on what is essential. Your presence gives immense hope that we have no right to dash, for the eyes of peoples and billions of human beings are on us.

For me, there is no dichotomy between the fight against terrorism and the fight against global warming. They are two great global challenges that we need to address, because we must leave our children more than just a world freed from terror. We owe them a planet protected from disasters, a viable planet.

The year we have just experienced beat all records: record temperatures, record CO? concentrations, and record numbers of extreme climate events: droughts, floods, cyclones, melting ice, rising sea levels and ocean acidification. The victims of these phenomena are counted in millions and the material damage in billions. No country and no region is safe from the effects of climate disruption.

How could we accept that the poorest countries, those that emit the fewest greenhouse gases, those that are the most vulnerable, should once again be worst affected?

Yes, what is at stake at this Climate Conference is peace. Yet hopes have been raised with the preparation of COP21. In September this year, the international community adopted a comprehensive agenda through the Sustainable Development Goals, which were endorsed during the United Nations General Assembly. I would like to congratulate Secretary-General Ban Ki-moon on that.

A hundred and ninety states – almost all the world’s countries – have drawn up action plans to reduce greenhouse gas emissions and adapt to climate disruption. And all global society’s stakeholders – local government, businesses, investors and citizens of all the great world regions – have also committed to the climate.

This increased awareness and this mobilization are bolstered by the lightning progress made in clean and renewable energy sources, which open up the prospect of a carbon-free economy. So to ensure a successful conference, France has given its all, and mobilized its whole government – starting with the Minister of Foreign Affairs and International Development, Laurent Fabius, who will preside over this conference.

CONDITIONS FOR SUCCESS AT COP21

I have visited the regions most affected by climate change myself, and come back with the same conviction that we need to ensure sustainable, fair development without compromising our planet’s limited resources. That is the equation we need to solve together during this conference.

I wanted the heads of state and government of the whole world to be mobilized from the outset of our work, to give this conference momentum and ambition equal to what is at stake. For an agreement needs to be reached in Paris on 12 December. Under what conditions can we consider that it is a good agreement, that it is a great agreement, and that it is an agreement that genuinely corresponds to the expectations of the world’s peoples, and in the long term? There are three conditions for us to be able to say that the Paris Climate Conference is or is not a success.

The first is that we need to define and mark out a credible path that will enable us to contain global warming below 2°C or even 1.5°C, if possible. For us to be sure that we are on that path, we need to provide for a regular assessment of our progress with regard to the conclusions of scientists and, thus, establish a “ratcheting-up” mechanism equal to our commitments, with meetings every five years.

The second condition is that we bring a mutually-supportive response to the climate challenge. No government should be able to shirk its commitments, even if a differentiation mechanism may take into account national circumstances and levels of development. No territory should be left alone to face climate change, particularly the most vulnerable countries.

I have in mind those islands that could, in a short time, quite simply disappear. Here, I want to be their spokesperson, because the planet’s very biodiversity – and diversity – are at stake. We need to draw conclusions from this: the agreement must be universal, differentiated and binding. The developed countries need to shoulder their historic responsibility, as they are the ones that have emitted the most greenhouse gases over the years.

The emerging countries need to speed up their energy transition, and the developing countries need to be supported in their adaptation to climate impacts. This is why financing needs to be provided to facilitate technology transfers. In Copenhagen, we set the target of $100 billion. Today, it is not a target that we need to set, it is resources that we need to identify, with guarantees on their origin and their accessibility.

Lastly, the third condition for an agreement in Paris is that all our societies, in their great plurality and diversity, need to be mobilized. All local leaders, investors, economic and social stakeholders, citizens and even great consciences and religions, all those who contribute to shaping the global public opinion, have to understand that things have changed. That is the key to addressing the climate challenge.

Today, I would like to pay tribute to the pioneers of the ecological cause, to all the precursors who, not so long ago, had to face incredulity and disdain for their warnings and proposals. In a few years, mindsets have changed profoundly. Businesses and financial stakeholders, who yesterday were reluctant, are now prepared to commit and change their behaviour.

Do they still need to be sent the necessary signals? That is the challenge of the gradual introduction of carbon pricing, so that greenhouse gas emissions have a cost that corresponds to the damage inflicted upon the planet, and investment decisions are gradually changed so that all technologies can be universally accessible.

Heads of state and government, I am going to be frank: to resolve the climate crisis, goodwill and statements of intent are not enough. We are coming to a breaking point. Paris must be the starting point of a profound shift. We can no longer consider nature as a mere bottomless reservoir of resources there for our sole and full benefit.

This transformation is both a moral obligation and a global opportunity, for it opens up possibilities for development with renewable energies, clean transport, waste recycling, agro-ecology, preservation of biodiversity, and universal access to all global public goods.

Thus, when electricity is made accessible to all, particularly in Africa, more than just light will be provided. Knowledge, education and development will be brought. On this first day of the conference, we have a wall to climb. This wall is built of our selfishness, our apprehensions and our resignation. This wall is built of indifference, carelessness and powerlessness. It is not insurmountable. Everything depends on us.

Heads of state and government, the hopes of all mankind rest upon your shoulders. I, myself, see in my own role how we need to combine the imperative of urgency – and everything it brings with it, including tragic events – and long-term choices. Of course, that balance is not easy to find, far from it. But once again, we have no choice.

Our greatest challenge is to move on from a globalization based on competition to a model based on cooperation, where protection will be more viable than destruction. We need to think of our planet as a single space, establishing a pact of fairness between the North and South and a partnership between mankind and nature.

So we need to set the bar as high as possible so that we can, at the very least, come close to this ambition, for here, in Paris, it is the planet’s very future we are deciding on. Thank you.